It was back to Blacktoft today, for the first time since January 7th. It was a beautiful and sunny, Spring day – easily the nicest weather of the year so far!

After all the rotten weather we’ve been having over the Winter (which has been so reluctant to go away!), it was a great relief to walk around the reserve today and witness many of the signs of Spring’s long-awaited arrival: trees in bud, flying insects (including a butterfly I wasn’t quick-enough to identify), and many woodland birds chirping-away in the trees establishing territories and calling for mates.

Several times today I heard the distinctive singing of (year-round-resident) Cettis Warblers, including one really loud one which can only have been a few feet away from me as I approached the door of Marshland Hide. It gave me quite a start when it struck-up its unmistakable, syncopated song!

There are, as yet however, no signs at Blacktoft so far this year of my favourite birds – the Summer-visiting Warblers. I particularly love photographing Sedge Warblers, sitting atop the reeds, performing their extended, rambling song. Blacktoft is a great location for Sedgies and other Warblers such as Reed Warblers, Grasshopper Warblers, Willow Warblers and Chiffchaff, which usully arrive around the beginning of May. Trying to photograph them is extremely challenging, but very much worth the effort when it (occasionally!) pays-off.

The first hide I visited today was Singleton Hide. Over the last few days I’d been reading the Blacktoft blog, and this particular passage from the 3rd of April inspired me to visit: ‘The marsh harriers continue to perform, with the airways over the reserve chock-a-block this morning as birds chased, fought, mated and displayed to and with each other’. In over thirty visits to Blacktoft, I’ve only ever once failed to see even a single Marsh Harrier, so I felt confident of some good sightings of these magnificent raptors.

Well, I wasn’t disappointed – there were indeed a great many Marsh Harriers about, soaring high over the reedbeds in the sunshine, sometimes singly and sometimes in pairs, and I enjoyed snapping away at them from each of the three hides which lie to the East of the Reserve: Singleton, Townend and First. Rarely do they come close-enough in to the hides to provide a frame-filling image, but they still make a fantastic photograph just the same.

A synchronised flying display from some Greylag Geese

A Marsh Harrier from Townend Hide

A Marsh Harrier from Townend Hide

Moving along to the Western end of the reserve I spent a good forty-five minutes or so in Marshland Hide where I photographed a pair of Winter-visiting Goldeneye dabbling-about on the lagoon. Occasionally, the male would (briefly) perform his courtship-display posturing, but the female seemed too pre-occupied with ducking for food and ignored him completely! 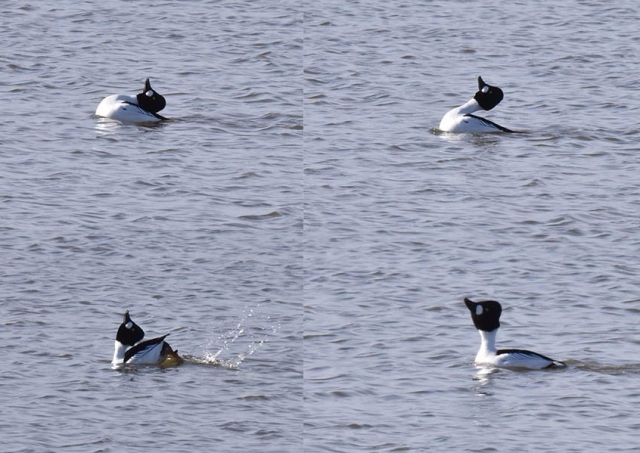 I spent the last few minutes of my visit to Blacktoft today in Xerox Hide, one of the two double-decker hides at this reserve, which affords really good views of the lagoon it overlooks. Birds present included two lovely Oystercatchers feeding on the mudbank nearest the hide, and an assortment of water-fowl including: Gadwall, Teal, Wigeon, Coot, Moorhen and Little Grebe. My final photographs of the day were of a Grey Heron catching and swallowing a fish, with nice sunlight illuminating it.

What did the Oystercatcher say to the Teal?…

That made me realise it was nearly tea-time for me too, so I made my way back to the car feeling happy with my day’s birding.

Now all I need is for the Blacktoft blog to announce the arrival of some warblers and I’ll be back asap!