Today I made a much-anticipated return visit to the RSPB’s reserve at Middleton Lakes, near Tamworth in Warwickshire. It was a balmy July afternoon when Helen and I paid our first visit there last year. Conditions were somewhat different today with the last vestiges of the recent very heavy snowfalls which have caused so much chaos in the UK, still present. Finally, by today a very welcome thaw was now underway, and the worst I had to put up with during this visit to the reserve was a rather slushy footpath and the occasional puddle to avoid! The temperture was about 7ºc – about 7-8 degrees warmer than over the previous few days!

Leaving the car park, and starting on the trail, I first saw the Heronry, which had a number of Herons in residence. With somewhere in the region of 25 nests, however, it will get very much busier in the next few weeks when the breeding seasons gets underway.

I next stopped at the viewing screen where the bird feeders are. The feeders are by the edge of a pond which today was still frozen solid from the recent very cold spell. A good many garden birds were present, and the seed in the feeders was going quickly. Several Mallards, a couple of Coot and a Moorhen were scrabbling about under the feeders for the seed which was falling from above. Right in the middle of the group, however, was a Water Rail. It’s always a joy to see one of these usually very reclusive and shy birds, and I snapped dozens of images of it in the hope of getting that ‘perfect shot’. What a great start to the visit! 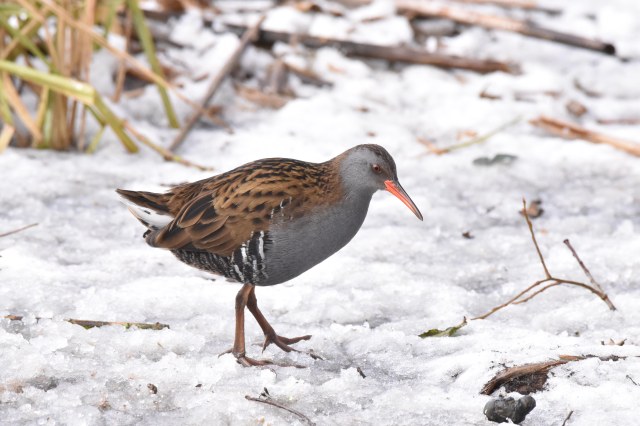 Further up the path leading to Fisher’s Mill Bridge, I stopped at the viewing platform which juts-out onto the lake. The lake itself was completely frozen-over, and the only birds I could see on the ice were a couple of dozing Mallard with their heads tucked under their wings. However, this was still a good spot to be at today because some kind soul had liberally sprinkled bird seed on a nearby tree-stump. Over the next few minutes I took photographs of Blue Tits, Great Tits, Robins, a lone Coal Tit and a couple of Nuthatch that took turns to snatch some seed whilst I stood there snapping-away with my camera.

A Great Tit pecking away at the seed

Further up the path I reached Fisher’s Mill Bridge which spans the Birmingham and Fazeley Canal. At this spot on our last visit, Helen and I were lucky-enough to hear a Green Woodpecker ‘yaffling’ in the trees. We caught a very brief glimpse of the bird flying overhead but were unable to manage a photograph of it. The trees were very different today, being devoid of foliage. Nonetheless, I did hear a brief ‘yaffle’, so I knew a Green Woodpecker was still out there somewhere.

Fisher’s Mill Pool was frozen-over but a number of Black-Headed Gulls were making a lot of noise on the islands in the lake. A couple of Mute Swans were standing on the ice way over at the far-side of the lake. Otherwise, I couldn’t see any other birds. I walked as far as the viewing screen which overlooks the Jubilee Wetlands, but again there were very few birds around.

Walking back the way I had come, I stopped at the edge of a field of stubble near Fisher’s Mill Bridge and saw a couple of Redwing picking over the stubble. I took a couple of photographs,  but the birds were rather too distant to allow a decent shot. Nevertheless, it was pleasing to see some of these Winter visitors.

A Song Thrush on the path infront of me

A Redwing looking for worms on the frozen ground

Almost back at the feeders near the car park, I stopped again to look over a grassy field near the farm buildings there. Again I spotted some Redwings along with a Song Thrush. This time the Redwings were a bit closer to me, but again not really close-enough for a good photograph.

I was glad to be back near the car, because the heavens suddenly opened and my visit today ended with me dashing to the car to get out of the rain! I wasn’t upset though because I knew I’d got some great shots of a Water Rail and a Nuthatch in the bag.

For my next visit to Middleton Lakes I want to go in the Spring time when, hopefully, there will be lots of warblers around.