It’s been over two years since my last visit to Attenborough Nature Reserve near Nottingham. It was a freezing-cold Wintery day today, with snow still lying on the ground following the ‘Beast from the East’ freezing spell Britain has been enduring this last few days.

I carefully inched my way over the compacted snow and ice which covered the ground in the car park, and made my way over to the Visitor’s Center first of all. Despite the cold weather, there were a surprising number of people out and about today (it was a Saturday after all), and many people were enjoying watching the very tame birds on the margins of the Coneries Pond, outside the visitor’s center. A number of species were present, including Mute Swan, Canada Goose, Mallard, Egyptian Goose, Tufted Duck and a lone Red Crested Pochard. I’d seen the Red Crested Pochard here before, and rather think that it is a permanent resident – perhaps it thinks it’s a Mallard?? 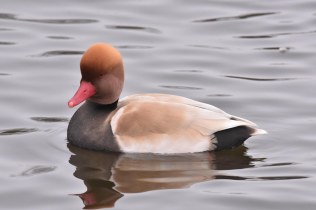 A Red-Crested Pochard by the Visitor’s Center 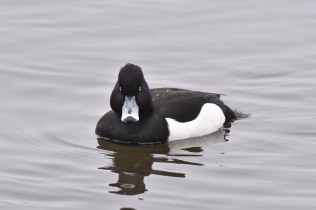 A rather mean look from this Tufted Duck

Next I started down the path which separates the Coneries Pond from the Tween Pond. As I crossed over the bridge at the start of the path, a fellow birder told me a ‘lovely Kingfisher’ was to be seen in a bush down below the bridge. I watched closely for about five minutes at the spot he had indicated, but alas, no Kingfisher sighting for me today! Sidenote: I really appreciate the fact that birders are such a sharing community, always willing to talk and share experiences. That’s one of the things that really makes the hobby special for me. 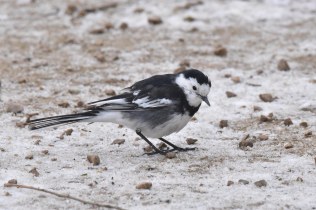 This Pied Wagtail was dwarfed by the nearby Mute Swans 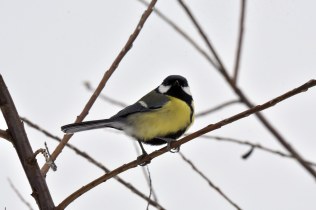 As I carried-on down the path, I spied (and heard) various birds on the water and in the trees around me. Numerous, very confiding Robins were around, hoping for ‘handouts’ from visitors like me. I saw one couple trying to coax a Robin to take seed from their hands and was reminded of the time at Leighton Moss a couple of Winters ago, when Helen and I managed to achieve that rather special experience.

On the Tween Pond were a couple of Great Crested Grebes ducking under the water in search of fish, and a great many Tufted Ducks, Mute Swans and Canada Geese were also present. 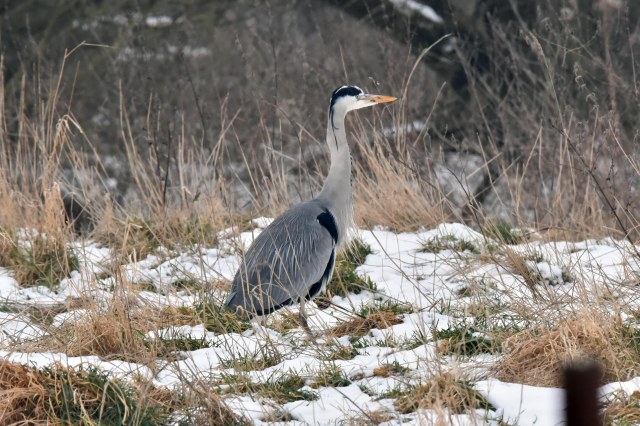 A Heron watches for a meal

I walked as far as the Kingfisher Hide and spent a few frozen minutes in there before I decided I was simply mad to be there on a such a freezing day, and set-off back up the path. On the way back I took some photographs of a Heron which was hunting in a meadow-type field, rather unusually, and a Pied Wagtail scrabbling around on the path in front of me. 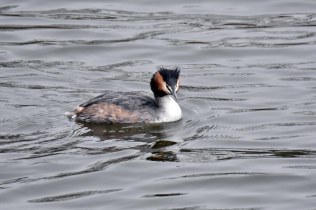 A Great Crested Grebe fishing for lunch on the Coneries Pond 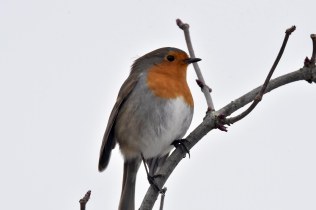 All in, I was only on the reserve for about forty minutes, but I saw over twenty bird species in that time. I’m looking forward to visiting Attenborough again – but only once the Spring has come!