My secong birding trip in as many days took me back to Old Moor for the first time in about five months. It was good to be back at what I consider to be my ‘home’ reserve.

It was a mild day for February at about 7°c and quite bright when I arrived. Fortunately, the winds that had been blowing over the last 24 hours or so had finally abated so conditions were very good.

My first port of call for the day was into the Bird Garden Hide. Lots of little birds were visiting the feeders today, and I was very pleased with some of my shots – especially ones I took of a beautiful little Long Tailed Tit – one of my favourite birds. It was half-term week in Barnsley and Rotherham schools this week and the hide was quite noisy with lots of excited kids squealing about what birds they had seen. After about quarter of an hour I decided to move on. One rather exasperated-looking mum mouthed a silent apology to me as I left the hide, but I reassured her that, as both a Grandparent and a Primary School teacher, I was well-used to noisy munchkins!

I next visit the recently revamped Tree Sparrow Farm. I’d long felt that the viewing screen here could do with improvement, and at last it has been done. The viewing gaps are now much enlarged and better-positioned, making it far easier to see what’s going on, and to poke long camera lenses at the birds. A huge improvement, and much appreciated!

A Kestrel watches over the Tree Sparrow Farm…

A male Yellowhammer at the Tree Sparrow Farm

As well as noticing the much improved facilities at the Tree Sparrow Farm on arrival, I also quickly noticed that a Kestrel was perched on top of one of the posts to the left of the viewing screen only about fifteen yards or so away. This, I took to be ‘Red’, the Kestrel-in-Residence that has been showing brilliantly on the reserve for some time now. I was very pleased to be able to take a number of photos of the bird before it flew off. 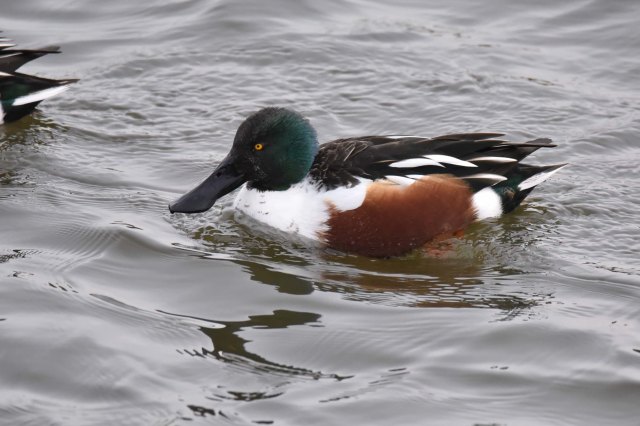 A male Shoveler on the main mere today

Next, I walked up Green Lane where I visited the Family Hide, Field Pool East, Wath Ings and the Wader Scrape. The water levels on the main mere were quite high today, so sadly there were no waders to be found anywhere on the reserve. I did see a number of other birds including a good many Shoveler, Canada Geese, Swans, Widgeon and a lone female Goosander from the Wader Scrape Hide.

‘Red’ the Kestrel has been in residence at Old Moor for some time now.

By the time I returned down Green Lane, the sky had gone rather dull and lifeless. This was a real shame as Red the Kestrel was sitting at the top of a tree near the Bird Garden Hide this time. I took several photos, but the dull sky made it difficult to bring out detail of the birds feathers.

I decided it was time to call it a day and headed back to the car. I certainly hope it won’t be another five months before I return to Old Moor!