Frampton Marsh, near Boston in Lincolnshire, is easily one of the best RSPB reserves I’ve ever visited, and definitely belongs in my ‘top-triumvirate’ favourite reserves along with Titchwell Marsh and Minsmere.

Frampton is about 80 miles away from home for me, and is thus quite ‘do-able’ as a day visit, (whereas the other two are significantly farther-away and necessitate an overnight stop). This fact makes it all the more strange that today’s visit to Frampton was my first in nearly eighteen months. Quite how I’d managed to leave it so long since my last visit, in December 2016, is something of a mystery, even to me!

Anyway, it was fairly mild at the reserve today, a bit breezy, but there were a good many sunny spells, and it was around 12-15ºc, so quite comfortable for the time of year.

Frampton is a superb reserve for waders, (one of my two favourite groups of birds, along with warblers), and I was excited about the possibilities that today might bring.

By far the best hide at Frampton, in my opinion, is the 360 Hide. This hide, which is at the end of a spit of land jutting-out onto a vast area of freshwater marsh, affords excellent views over a huge expanse of the reserve, with the water’s edge only about ten feet in front of the hide on the south-west facing side.

During past visits to this hide, I have had some amazing close-up views of a variety of birds, including Ruff, Curlew, Skylark, Avocet and Pintail. With this in mind, it’s probably not surprising that I made a bee-line for the 360 Hide first today!

On entering any circular-shaped bird-hide that already has other birders present, it’s always immediately apparent where the ‘good stuff’ is located by where the others birders are congregated. Today, as I walked into the hide, most of the birders present were seated by the windows facing north-east, where the sun was shining beautifully on literally thousands of assorted waders feeding out on the marsh.

A Ruff showing-off its wonderful plumage

A lovely Redshank enjoying the sunshine at East Hide

I quickly sat down, pointed my camera lens out the window and began to survey the scene before me. There were huge numbers of Avocet, Black-Tailed Godwit and Brent Geese along with other, less-numerous species including: Ruff, Dunlin, Redshank, Ringed Plover, Little Ringed Plover, Pied Wagtail and the ubiquitous Black Headed Gull.

Just as I was wrestling with the dilemma of where to point my camera first, a sudden movement out the corner of my eye alerted me to a pair of Skylarks which were, well – ‘larking-about’ on the grass bank just in front of me. The two birds were alternately on and just above the ground, and were squabbling with each other just a few feet from where I was sitting. I quickly fired-off a few shots of these magnificent birds which are rarely-seen so close-up.

The next focus of my attention was a Little Ringed Plover which was darting about on the edge of the mudflat just near to where I was sitting. I watched with bated-breath as the bird came ever closer, allowing me to take a good many shots of this tiny wader, with the sunshine showing-off his plumage to great effect. A few moments later I had a very similar experience with the closely-related Ringed Plover, which also provided me with the opportunity to capture some close-up images for a good session of ‘compare and contrast’ the characteristics of the two species. 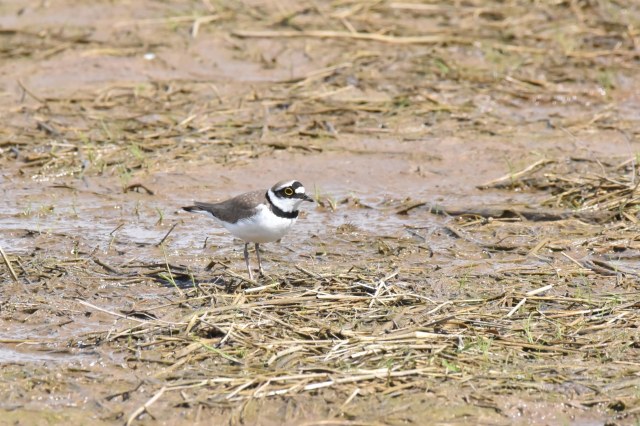 A Little Ringed Plover from 360 Hide

A Ringed Plover on the mud outside 360 Hide

After  spending about forty-five minutes in the 360 Hide, I decided to walk to the East Hide, which is also an excellent hide for seeing waders. As I walked along the path towards the hide, I marvelled at the sheer numbers of waders on the reserve. Being adjacent to the Wash and its vast salt marshes, Frampton is an absolute magnet for hundreds of thousands of birds each year. In the far distance, I could see a huge flock of Brent Geese flying over the reserve. During Helen’s and my very first visit to Frampton, nearly four years ago, we were walking along the ‘sea wall’ which separates the reserve from the salt marsh, when flock after flock of ‘Brenties’ came in over our heads and was very reminiscent of old, World War 2 newsreels showing ‘thousand bomber’ raids.

I spent the next half hour or so in the East Hide, this time photographing some Avocet and a Redshank, which were feeding in the mud near to the hide. Once again I saw some Little Ringed Plovers darting about near the water’s edge.

On leaving the hide, I decided against walking all the way along the sea wall, as the breeze was ever-strengthening, and I was still about a kilometer away from the Visitor Centre car park (and the toilet!). I took a brief detour up part of the Reedbed Trail as I had heard from another birder that a Corn Bunting was ‘singing its little heart out’ on a bush near the path. I was lucky-enough to photograph a Corn Bunting here once before, so knew precisely where the bird was likely to be. Sadly, I couldn’t see any sign of the Corn Bunting today, but I did watch a Kestrel hovering above the trail keenly watching the ground for any tell-tale movements…. 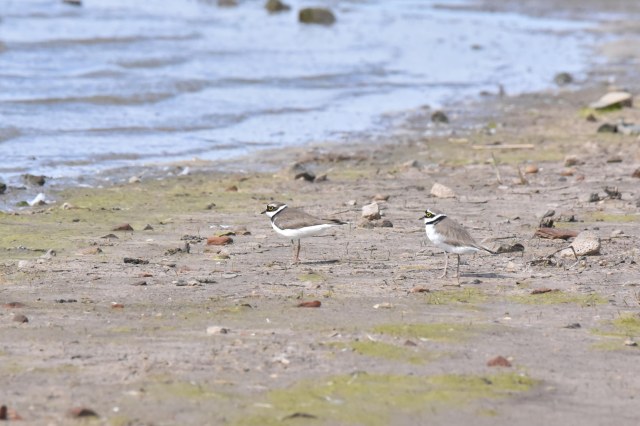 A pair of Little Ringed Plovers at East Hide

As I was passing there anyway, I couldn’t resist spending another half-hour in the 360 Hide – well, I had come 80 miles for this, after all! The same birds were there as before, of course, and I spent my time taking even more photos of Ringed and Little Ringed Plovers.

It was some reluctance that I finally decided I’d better head back to the car and begin the long drive home.