On our way home from our Norfolk Birding Weekend, Helen and I couldn’t just drive past Frampton Marsh – a reserve that we’ve visited a good many times previously and enjoyed so much!

The weather has been oppressively-hot all weekend, and once again today it was up around 30°C on arrival at the reserve. If anything it felt even hotter here, away from the coastal breeze which took the edge off the temperatures at Titchwell.

Helen and I decided against walking the perimeter of the sea wall which separates the main marsh from the salt-marsh and the Wash today. A visit to the 360° Hide would be more than sufficient in this heat.

Black-tailed Godwits feeding on the lagoon.

On my last visit to Frampton, in April, I had spent much of my time in the 360° Hide facing North-East, watching numerous waders, including Little Ringed Plover and Ringed-Plover quite close to the hide, at the water’s edge. Today, after weeks of dry weather, there was no water whatsoever to the North-East of the hide and so we spent our time facing South West instead, where there was some water, but nothing like as much as there usually is. Much of the view before us was almost like desolate wasteland which clearly hadn’t been wet for some time. 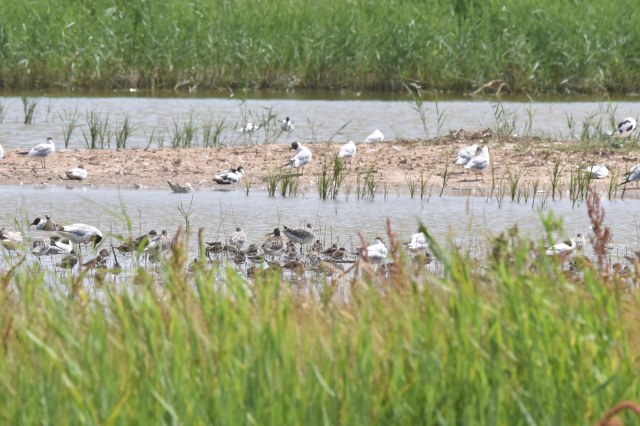 Part of a very large mixed flock at Frampton today.

A good many birds were around, nonetheless, with Ruff, Avocet and Godwits once again dominating the field.  There were a few Redshank around, which were constantly-harried by Avocet if they dared to come close to where the Avocets were feeding, and I eventually found both Ringed and Little Ringed Plovers in the distance. As yesterday at Cley, however, it was much too hot for most birds to be out and about through the heat of the day. 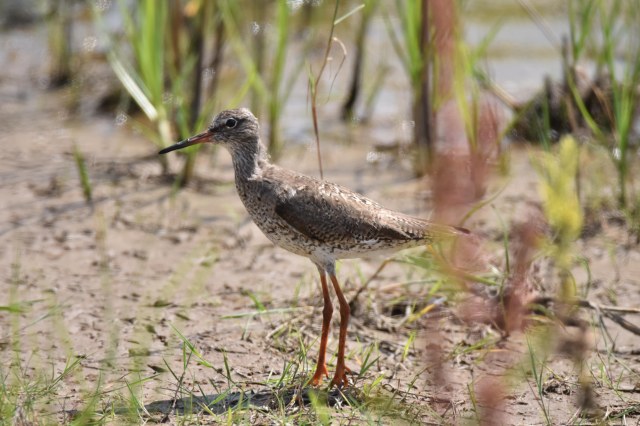 We moved over to the nearby Reedbed Hide and watched some distant Spoonbills preening themselves in the sunshine. A number of water-fowl were also present here along with the (seeming) ubiquitous Black-Tailed Godwits and Ruff.

As we walked back towards the Visitors’ Center and car park, we paused to take some photographs of the Spoonbills which we were now much closer to. As we watched, two of them took off and flew-lazily around the mere before landing on an island in the middle of the lake.

Two Spoonbills on an island on the main marsh today

Never an easy subject to photograph – a flying Swallow.

Our final photographs of the weekend were of a few swallows and a Sand Martin which were flying around just above the VC when we arrived there. A good way to end our fabulous birding weekend. Now all we needed (desperately!) was a very long, very cool drink and some air-conditioning in the car!

*PS: The total number of birds we sighted over the three days was 73. Not bad at all!