The second day of our Norfolk Birding Weekend took us on a return visit to Cley Marsh, about twenty miles Eastwards along the North Norfolk coast from Titchwell Marsh. And if Helen and I had though it was a hot day yesterday at Titchers, well today was even hotter still! 30°C at around 11am, with no breeze whatsoever. Phew!

We quickly decided that we wouldn’t be able to visit all of the reserve today and prioritised going to visit the cluster of three distinctive thatch-roofed hides which provide views over the main marsh.

The walk from the main car park to the hides is on a board-walk through a very high reedbed – mostly about 6-8 feet tall. On the way we had heard a variety of small bird song from within the reeds, but had had no sightings. It was quite oppressive walking to the hides in the heat, and we were very relieved when we got inside the first one and sat down in the cooler space.

A lovely female Mallard showing that their plumage isn’t so drab after all!

Spot the tiny Dunlin next to the ‘giant’ Godwits.

The first hide looked-out onto a large body of water. We could see: Ruff, Avocet, a solitary Green Sandpiper, Black-tailed Godwit, Mute Swans, Lapwing, Greylag Geese, a distant Marsh Harrier perched in a tree beyond the lake, and a few tiny Avocet chicks on the central island. The new binoculars again made identification of more distant birds much easier and pleasureable.

A fellow-birder, who joined us in the first hide after about half an hour told us that one of the other hides we had yet to visit currently had a Greenshank near the front, so we decided to try our luck there.

Sadly, no Greenshank was present, but several Lapwing and Avocet were close to the hide and provided good views. A Marsh Harrier flew-over nearby and we took a few photographs of it before it flew out of our sight. Whilst we were watching, both a Green Sandpiper and a Redshank arrived a few moments apart, but both birds were too far away to allow good photographs.

The third (middle) hide provided the largest amount of birds. Huge numbers of Godwit, Ruff and Greylag Geese dominated the water and the main island. A few tiny Dunlin could be seen in the distance, at the far side of the island, dwarfed by the much larger birds nearby. As we watched, it was comical to notice, as we have done many times before, how dominant the tiny Avocet can be. Many times a much larger and bulkier bird such as a Mallard would be driven-off by a belligerent Avocet which wanted an unfeasibly-huge area of free space around itself in which to feed undisturbed. Avocet are also very belligerent when other birds stray too close to their nests when they are brooding eggs, but huge numbers of Avocet chicks are predated-upon each year as they tend not to be quite such doting parents as might be imagined! 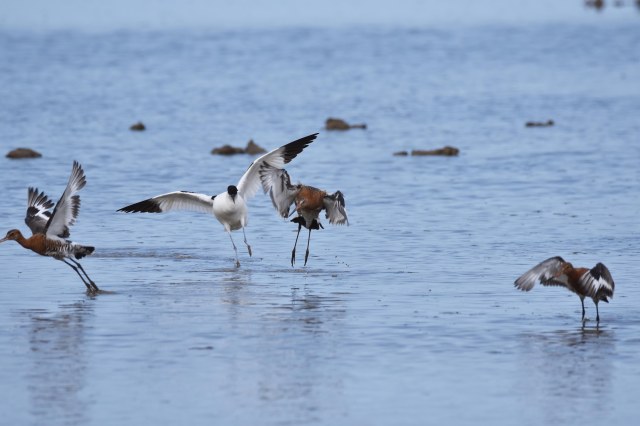 An Avocet ‘seeing-off’ three Godwits which were trying to feed in the Avocet’s patch.

We were feeling in need of refreshment at this point in the day, so made our way back to the Visitors’ Center and (large) restaurant/shop. a couple of cold drinks and a sandwich made all the difference, and encouraged-us to try a bit more of the reserve.

Next we drove to a secondary car-park at the road-end of the high bank which leads directly to the beach at Cley. It was too hot on this occasion to walk the entire path, but we managed to go about half-way along the path, photographing a Meadow Pipit and a few gulls as we went.

Our day at Cley had been very enjoyable, if hot! We got back in the car around 3.30pm feeling that we wanted to try our luck somewhere else before ending our birding day. It was, by this time, too late to visit another favourite reserve we had passed on the way to Cley – Sculthorpe Moor (where the reserve closes at 5pm) , so we decided to spend another couple of hours at Titchwell, where there is no closing time and no gates to close anyway!

On arrival at Titchwell it was still quite warm, and since we had had such a full (and exciting) day at Titchers testerday, we decided we’d not go too far today. The Beach Trail path has a number of benches situated along its length. Helen and I have previously enjoyed sitting on those, watching for warblers in the reeds, and that’s what we decided to do this evening.

Part of the huge, mixed-flock of birds on the Freshwater Marsh at Titchwell.

As we left the car park and headed through the trees which lead to the Beach Trail, we were ‘accosted’ by a very angry Wren which was clearly unhappy with our intrusion near to where it must have a nesting site. The bird was making very strident, and very insistent alarm calls telling us to clear-off! I’ve been surprised before at how loud a tiny wren can be. This occasion was no exception!

We walked as far as the Island Hide, where we’d spent quite a bit of time yesterday. There was no sign of the Lesser Yellowlegs today, but a good number of Avocet and Ruff were still sifting-through the shallow mud just in front of the hide. And once again, I couldn’t resist taking some photographs of the tiny, (and rather distant!) Bearded Tits in the reedbed across from the hide. 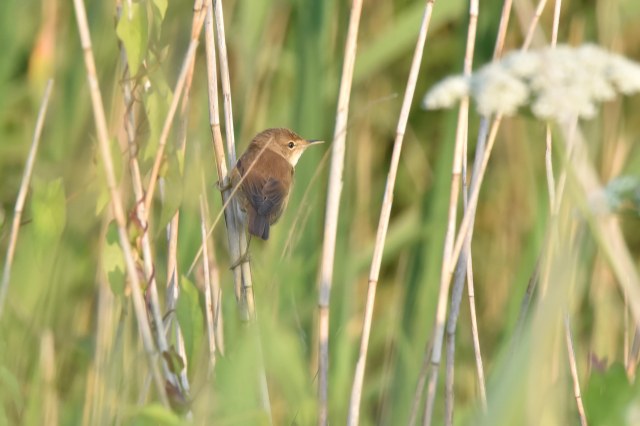 After about an hour of sitting in the hide, we slowly wandered back towards the car park, spending time sitting on a couple of the benches, as we had planned. As we sat there we were treated to very good sightings of a Sedge Warbler and a Reed Warbler, both of which spontaneously decided to break cover and sit atop some tall weeds for several minutes.

A gorgeous Sedge Warbler sitting atop some reeds.

So, another great day’s birding. Our weekend was passing much too quickly. Frampton Marsh tomorrow on the way home. Once again the forecast is for very hot weather. Will there be many birds about for us to photograph? Time will tell.