A few days ago Helen found a facebook posting that someone had put up, showing an image of a beautiful Mandarin Duck at a pond near Loxley, just the other side of Hillsborough. As neither of us had ever seen a Mandarin Duck before, we decided we’d try to find the place to see if the duck was still there.

We drove out of Hillsborough along the road towards Damflask Reservoir and Low Bradfield. Just as we were getting close to where we needed to be, there was an almighty, (albeit brief) hail shower. Two minutes later and the sun was out again – really bizarre weather!

Once we had arrived at the pond (along a dreadfully poor road surface!), we got out of the car for a quick peek to see if our trip had been worthwhile. At this point I don’t think I was very hopeful, so we left our cameras in the car initially. Within two minutes we were dashing back to the car for them!

Here’s an image of what we found:

What a fabulous bird! It was just a few feet away from us, and a mere twenty feet or so from the car – how very convenient! Not only that, but it was quite tame and showed no inclination to swim away from us – perhaps that’s the advantage with ornamental ducks that are used to humans.

There were lots of other waterbirds on the pond – all the usual suspects were present: mallards, coots, mute swans etc. There was one other unusual specimen however: this beautiful Pintail/Mallard hybrid: 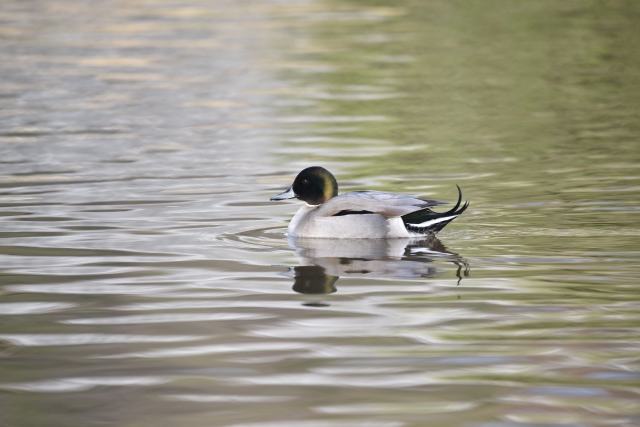 A brief birding trip, but ultimately very rewarding! We’ll certainly be visiting the pond again now that we’ve found it.