Only four days since my previous visit, and I was back at Old Moor again today. It was a beautiful sunny day in the Dearne Valley when I arrived late morning, and quite a contrast from four days ago when it had been damp and showery.

I decided to try my luck in the Bittern Hide again and made my way straight there from the Visitors’ Centre. Various small birds were singing in the trees along the path towards the hide, and I heard at least one Reed Warbler singing in the reeds as I passed. At this time of year, of course, with so much foliage on the trees, it is infinitely easier to hear small birds than to see them, so I didn’t spend too much time trying to spot the elusive little blighters today. 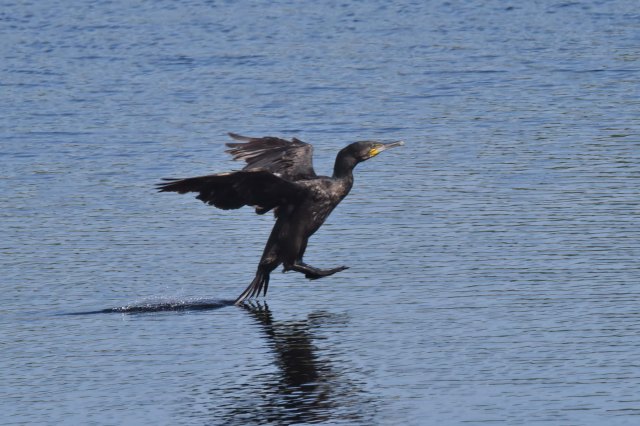 A Cormorant landing in front of the Bittern Hide

I spent over an hour in the Bittern Hide today, during which time I witnessed a viscious-looking scrap between a pair of Moorhens and a Coot (which took place right at the water’s edge just near the hide), photographed a Cormorant gliding in to land on the lake to commence fishing, and observed a pair of Great Crested Grebes dabbling-about in the water with two chicks in tow. At no point, however, did I see any Bitterns! At one point, a lady seated along the bench from where I was, announced that in the far distance she could see a pair of Bittern flying low over the reedbeds in the direction of the Observation Hide,  (which is very near to where the birds usually nest at Old Moor). I immediately focussed my binoculars on the general area she was describing, but couldn’t see and birds at all, much less a pair of Bittern! Wishful thinking perhaps?? 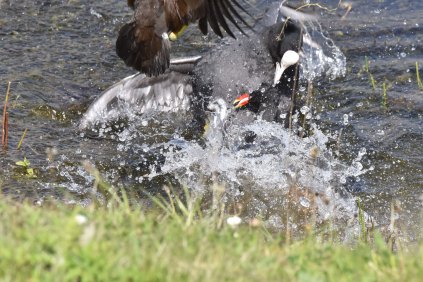 Ouch! A nasty disagreement between a Coot and a Moorhen. Neither bird was badly hurt, however.

This Blue Tit was demonstrating its acrobatic skills!

Afterwards, I decided to walk up Green Lane to visit the hides along the Main Mere. There wasn’t much to report from the Family Hide or either of the Field Pool hides, (Black Headed Gulls dominate the mere outside the Family Hide and the Wader Scrape at this time of year and pretty-much keep all other birds away), so I spent much of the rest of my visit today between Wath Ings and the trees along Green Lane itself.

This Great Crested Grebe was displaying its head tufts to great effect.

Wath Ings hosted a number of Pochard today, the males looking resplendent with their red heads gleaming in the sunshine. Also present were several Oystercatcher, Tufted Duck, a single Shoveler and, of course, the ubiquitous Black Headed Gulls. My highlight at Wath Ings today, however, was a lone Great Crested Grebe which was fishing fairly close to the hide. Between dives below the surface in search of food, the sun shone beautifully on the bird’s plumage and the Grebe’s head tufts, (which aren’t always raised), were showing particularly-well on this occasion. 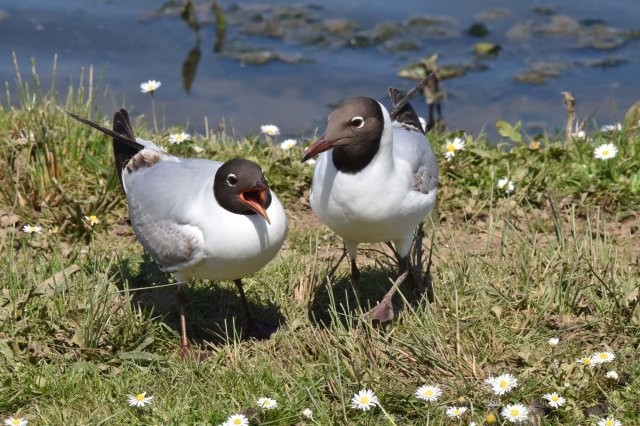 On the way back down Green Lane I managed to capture a couple of images of a Long Tailed Tit in the hawthorn trees that line the path. They are always a joy to see, and are generally much less timid than most other small bird species that flit around the branches of the trees on Green Lane. I was very pleased with the image shown below which shows the bird nicely-framed within the hawthorn.

Who, me? A lovely image of a Long Tailed Tit in a hawthorn tree on Green Lane

No particularly-exciting birds on show today, perhaps, but it was enjoyable to walk around the reserve in the lovely sunshine. I stand by what I have said several times before: Old Moor never disappoints!