I paid a fourth visit to the RSPB’s Middleton Lakes reserve near Tamworth today. It was a slightly dull day, but quite mild for the time of year, being about 9-10ºc. It was much warmer than it had been over the previous week, and as such, I didn’t need to wrap-up too warmly. I mention this, because on a previous visit to Middleton Lakes (in March of last year), there was thick ice on the lakes and ponds around the reserve, which forced a Water Rail to feed out in the open on frozen ground beneath the bird feeders. On that occasion I was fortunate-enough to be able to capture lots of really clear images of this (usually) very reclusive bird. Not so today, being much milder weather! 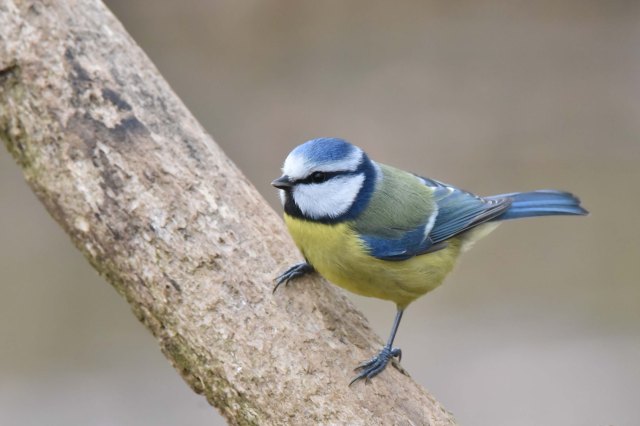 A lovely Blue Tit perched near the feeders

At the beginning of the reserve trail at Middleton Lakes, and just beyond the car park, there are good views across to a large Heronry, which is some 150-200 yards away from the path. On today’s visit I could see at least ten Herons, either perched at their nests, or flying around the nearby trees, making quite a racket with their screeching calls! I concluded that Herons must breed early-on in the annual calendar. 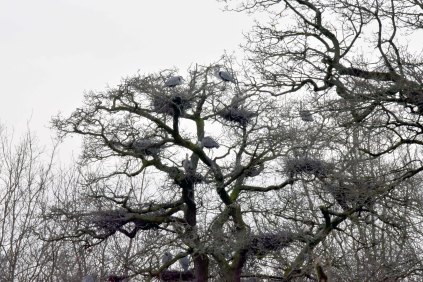 Some of the birds showing at the Heronry

A Dunnock eyes me warily….

A Coal Tit perched just long enough for this one shot!
Next stop was the bird feeders where I had had such good sightings of the Water Rail eleven months previously. The trees and bushes around the feeders have been cut-back severely, but that didn’t put-off the literally hundreds of garden birds which were feeding there today. The wardens had judiciously left lots of perches around the feeders which provided perfect photographic opportunities to snap away at: Blue Tits, Great Tits, Chaffinches, Greenfinches, Goldfinches, Robins and a single, (brief-visiting) Nuthatch. I must have stood at the viewing point for at least half an hour enjoying taking close-up photos of these delightful birds.

Now, I know we get all of these common garden birds in our own garden at home. However, what makes photographing them truly special at this location, is that it is possible to get really close to the birds. Couple that with a variety of excellent perches, with nothing close-to behind them, (which means that it is quite easy to isolate the birds against a totally blurred background in your photos), all makes for potentially perfect bird photography! 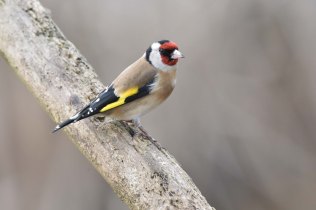 Always a pleasure to see a beautifully-plumaged Goldfinch

This Great Tit was enjoying the seed left by some kind passer-by
Eventually, I was able to drag myself away from the feeders, (having shot several dozen frames) and ventured up the Woodland Trail path which leads to the lakes from which the reserve gets its name. Unfortunately, the path was extremely muddy today and my choice of footwear wasn’t ideal for the conditions. Nevertheless, I carried-on up the path towards the first good stopping-point at Fisher’s Mill Pool, which is a wooden viewing-point overlooking one of the lakes. This is clearly a favourite spot for both birds and bird-watchers alike, and once again I was able to capture some close-up images of several species of garden birds which were feeding on a handful of grain that some kind person had left on a tree stump at the viewing-point.

I decided not to proceed any further up the path due to the muddy conditions. As I walked back down the path I was thrilled to hear the unmistakable drumming of a Woodpecker drilling its way into the wood of some tree near to where I was passing. I was also treated to a very close encounter with a Robin which I was almost able to coax into feeding from my hand. The bird was clearly tempted, but, sadly for me, resisted my outstretched hand in the end.

This was a shorter visit to Middleton Lakes than my previous ones, but I left very happy with the photographs I had taken. Middleton Lakes is a great reserve, and well worth a visit at any time of year.