Today was my 300th birding excursion. Looking back over my records,  I noted that it’s almost 6 years since I started bird photography in earnest, which equates to approximately one outing per week. Currently, my total of wild birds photographed within the UK stands at 180, but it has become so much harder now that I’ve already snapped a high proportion of all the commonly-seen species. The two birds I most want to add to that total are Green Woodpecker and Dipper. Both are birds that I’ve previously seen in the wild, but not yet photographed. I hope it’s not another six years before that ambition is fulfilled!

For my visit today, I chose to go back to Attenborough Nature Reserve near Nottingham. Being only about 35 miles away, and straight down the M1 for most of it, Attenborough is an easy reserve for me to visit. The reserve itself is quite extensive, is comprised mostly of various bodies of water, and has an excellent reputation for the range of bird species seen there. I myself, have had a number of good successes with my bird photography at Attenborough, and very much hoped that today would be similarily productive.

A Red Crested Pochard by the Visitors’ Center

By now Spring is well underway, and a huge ‘wall’ of birdsong greeted me from the moment I stepped out of the car at the Visitors’ Center today. I could hear Chiffchaff, Cettis Warbler, Robin, Great Tit, Sedge Warbler, Blackbird and probably several more species that I was unable to identify.

On arrival at Attenborough, I always start by looking at the assorted waterbirds that are gathered outside the Visitors’ Center, awaiting kindly humans who are prepared to feed them. Today, there were the usual Mute Swans, Canada Geese, Tufted Duck and Mallards, but one thing that is particulary unusual about Attenborough is that these ‘regular’ birds that appear in this gathering outside the VC also regularly include somewhat more exotic species such as Red Crested Pochard and Egyptian Goose. In fact, I don’t think I’ve ever visited Attenborough without seeing these two species. The only other reserve where I’ve ever seen Red Crested Pochards is Titchwell Marsh in Norfolk, and those birds keep themselves well-distant from humans. Not so at Attenborough where the bird I saw today was quite tame, (only about six feet away from where I was standing), and appeared to be completely unconcerned about my presence.

Sand Martins arriving with food for their young 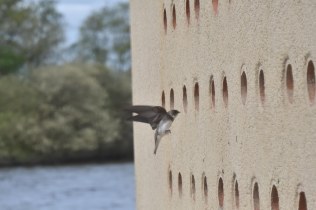 After photographing the Red Crested Pochard, I decided to go through the Visitors’ Center and out the back entrance to visit the bird hide which overlooks Coneries Pond. This hide is immediately adjacent to the Sand Martin nesting wall, which today, was being made full-use of. There were Sand Martins buzzing about all over the lake in front of the hide, and regularly returning to their nests with food for their young. I spent about fifteen minutes trying my best to photograph this spectacle, but Sand Martins are such fast fliers, which dart both into and out-of their nesting holes, that it’s nearly impossible to capture a bird, which is both entirely within the frame of the photograph and in any sort of decent focus! However, as I keep telling myself, if it wasn’t a challenge I wouldn’t be doing it!

After my encounter with the Sand Martins, I next wanted to walk down the path leading towards Clifton Pond and its elevated hide. As I walked down the path there were birds singing everywhere – but could I spot even one of the little blighters…..? Grrr!

As I walked along the spit of land adjacent to the Wheatear Field, a really loud Sedge Warbler was singing just the other side of the hedge. (The Sedge Warbler’s song is without doubt my favourite birdsong). But, as before, the bird was nowhere to be seen…. double-grrr! 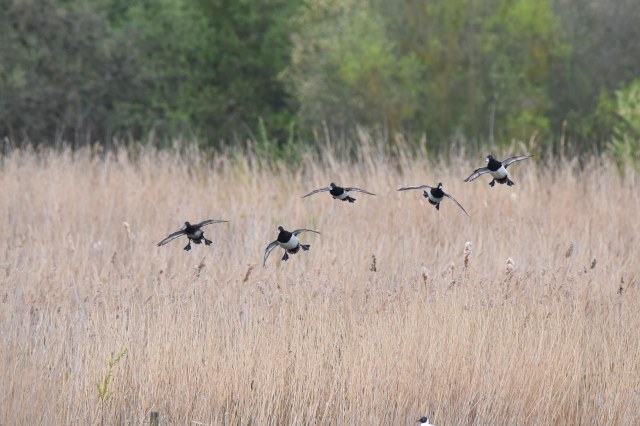 A flight of Tufted Ducks arriving at Clifton Pond

I climbed up the two flights of steps and settled myself into the elevated bird hide, which affords an excellent view, both to the North, over Tween Pond and to the South over Clifton Pond. On a previous occasion whilst sitting in this hide, I was treated to a rather good view of a Water Rail, dabbling about in the reeds quite near the hide on the Clifton Pond side. Now, whilst I didn’t have a repeat of that experience today, I did, for the briefest second or two, spot a Bittern coming in to land in amongst the reeds. It was all over far too quickly for me to have time to react and raise my camera, and indeed, the several other birders present in the hide failed to spot the bird at all! I was nonetheless enthralled to have had only my second-ever Bittern sighting.

About six feet from where I was sitting up high in the elevated hide, a pair of Great Tits took up perches at the top of a hawthorn tree and began singing really loudly, right in front of me. I took a great many shots of these birds, given such a glorious opportunity, and with such willing models!

This fabulous Great Tit took up a perch just about six feet from me and burst into song.

After about half an hour, hoping that the Bittern might fly up out of the reeds again (without success!), I decided to try my luck along at the Kingfisher Hide, which also overlooks Clifton Pond. As I took up my position in the hide, I discovered a Gey Heron standing quite still, in the shallows just in front of the hide, watching for any tell-tale movement of something it could spear with its long, razor-sharp beak. I eased up the window into the locked-open position as carefully, and quietly as I could, trying my very best not to spook the bird. I managed to take a few pictures of the bird before it decided that I was enough of a threat to cause it to fly-off!

After leaving the hide I made my way back up the path, back towards the Visitors’ Center and the Car Park. There were still loads of birds singing all around me as I walked along the path. This time I had a bit more success with sightings – a Robin and a Great Tit! Nice birds, of course, but where on Earth are all the Blackcaps, Reed Warblers and Whitethroats when you want to photograph them?? A Cettis Warbler was once again tantalizingly-close to where I passed it, but, as usual, Cettis are far more frequently heard than seen!

Attenborough is a super reserve, which is always worth visiting. One day I’ll get a really good, clear, long sighting of a Bittern. Today could so easily have been the day. Perhaps next time….