I went to Old Moor again today. It was warm but a bit cloudy as I walked around the reserve, and, as it was a Tuesday afternoon, it wasn’t too busy.

I first went to the Bittern Hide, the source of so many Bittern sightings over the last few weeks. The birds have had another successful breeding season at Old Moor this year, and multiple feeding flights are witnessed most days at the moment.

I stayed for about half an hour but there was very little about; a lone Little Egret fishing off in the distance, and the regulation Great Crested Grebe were the most exciting things I witnessed during my brief stay here today.

Next I took myself off up Green Lane in the direction of my favourite Old Moor hide – Wath Ings. I sat in the Field Pool West Hide for a few minutes and watched a family of Canada Geese foraging for food on the far bank. A large number of juvenile Black Headed Gulls were noisily-pestering their parents for food (a recurring theme over most of the reserve at the moment), and an assortment of Mallard, Coot and Moorhen were also in attendance. 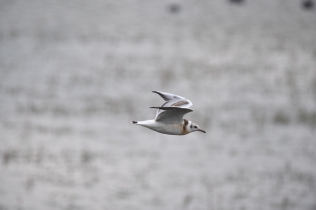 A juvenile Black Headed Gull flying over the Wader Scrape 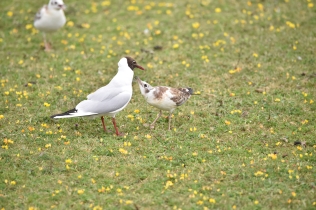 A juvenile BHH Gull begs for food from its parent

Moving up to the Wader Scrape next, I was amazed to see just how many BHH Gulls (with nearly full-grown chicks in attendance), were present. There were very few other birds around due to the sheer numbers of gulls – they were just everywhere today!

Back on the path, on the short walk to Wath Ings from the Wader Scrape, and I was treated to the sight of a rather nice pair of Linnets on the path ahead of me. At last something good, I thought to myself! I managed to take a few quick frames before the birds departed again, but I was pleased to have seen them, at least.

In Wath Ings Hide, the star performer of the day was a Little Egret which was fishing in the shallows just below the hide. As I watched the bird over the next few minutes, it must have caught at least half a dozen small fish, which very quickly disappeared down its gaping jaws each time. 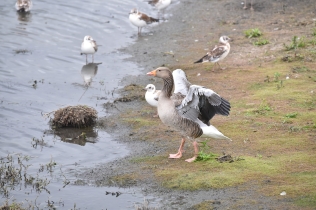 A Greylag Goose stretches its wing muscles at Wath Ings 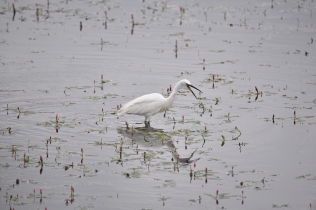 On the way back down Green Lane again, I took a brief detour to look for small birds at the recently-installed viewing screen. The spot has long been a great location for a variety of small woodland birds such as Blackcap, Willow Tit and Chiffchaff. As I approached the viewing screen, I became aware of a Linnet perched at the top of a nearby tree, giving me excellent views of its full breeding plumage, resplendent with its red chest feathers. The bird stayed put for a good few minutes, graciously allowing me plenty of time to get some good shots before it finally decided it had posed long-enough and flew off. I was very pleased as my previous ‘best Linnet shot’ was not as good as I would have wanted, and today I achieved a much better image. 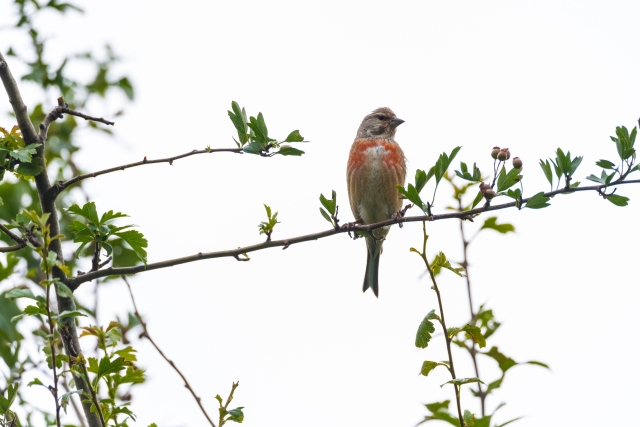 A Linnet in full breeding plumage

As I continued down Green Lane, I passed a spot where on numerous previous occasions I had heard (but never seen!) a Sedge Warbler singing in the reeds immediately adjacent to the path. Today it was there again – singing its heart-out whilst I stood only a few, short feet away, peering hopefully at the Reeds, hoping for a sight of the bird. The Sedge Warbler is an amazing singer and it always fills me with awe as its song rambles-on for ages, seemingly without end!

On this occasion I managed a few tantalising glimpses of the bird through the reeds, but couldn’t see enough of it to capture a photograph. I wasn’t too disappointed though, it was exciting-enough to be so close to such a fabulous bird.