Today was our second day at Titchwell. Once again it was a bit grey and cloudy, but there was no sign of rain in the sky or on the BBC’s weather forecast for the day. It was about 14 degrees temperature-wise, so no big coats were required.

This time we decided to walk along the Fen Trail and then the East Trail past Patsy’s Reedbed. There were dozens and dozens of small birds singing in the bushes and trees as we traversed the boardwalk along the Fen Trail. Each pond that we looked into was full to bursting (well nearly!) with frogs and spawn. Spring had very definitely arrived at Titchwell! 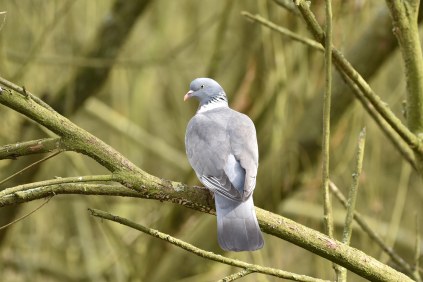 A Woodpigeon enjoying the morning sunshine

Frogs and spawn were in all the pools on the site

A stunning Robin, begging for food

Our first stop was at Fenland Hide. Here two beautiful Mute Swans were lazily feeding and looking very graceful, as always. A sudden movement to the right of the hide heralded a very brief sighting of a Sparrowhawk as it swooped over and disappeared behind some bushes. A distant Marsh Harrier could also be seen over the reeds some way ahead of us.

Next we walked on to the viewing screen overlooking Patsy’s Reedbed where we glimpsed, amongst other birds, a Red Crested Pochard. Several of them could be seen, obscured in the reeds, but only the one bird showed itself for a quickly-snapped photograph.

Next we walked along the path as far as we were allowed to go at this time of year, (an Autumn-only trail begins here, from which Helen and I viewed some Spoonbills on a previous visit.) Here we were lucky-enough to see some Stonechats and a very-unexpected Chiffchaff!

After returning back the way we had come, we stopped at the cafe for a much-needed drink and snack. Suitably refreshed, we decided to return to the Beach Trail again, as we had done yesterday. Once again the Water Rail was dazzling the crowds. Today it was in a more open part of the ditch than yesterday, and was therefore much easier to photograph without distracting foliage in the way!

A fabulous Water Rail delighted the crowds – me too!

A flock of Dunlin flying over the Volunteer Marsh

We decided that, by this time, the best of the day had been and gone, so we wouldn’t go all the way to the beach. Instead we only walked as far as the Parinder Hide where we had had such unexpected success yesterday. Once again it was the salty Volunteer Marsh that provided the ‘good stuff’ today. A flock of Dunlin repeatedly flew past us, all wheeling in perfect unison; great to see, but very hard to photograph! Numerous Avocet, Curlew, Shelduck and Grey Plover were all showing-well, and some of them were even closer-in to the hide than yesterday.

We finished the afternoon in the other half of the Parinder Hide looking out onto the Fresh Marsh. Here we saw a couple of Golden Plover, a Ruff and a Black Tailed Godwit along with dozens of Avocet, Black Headed Gulls and assorted ducks. Meanwhile, a gaggle of racous Greylag Geese, only a few feet from where we sat in the hide, provided their own version of an audio commentary on the day’s proceedings!

On the way back down the trail towards the car park we heard the unmistakable sound of a Skylark somewhere over the marsh to the right of the path. Another sure sign that Spring was here.

Another great day at Titchers, and our total of different bird species seen over the weekend had swelled to 67 species.