Helen and I paid a visit to Old Moor today: our first in about six weeks. It was a beautiful sunny day for the time of year and were eager to see some birds.

I was aware from Birdguides that there had been a group of waxwings showing in the trees by the car park earlier in the day, and we were very much hoping they’d still be present. Well, on this occasion we were not to be disappointed; as soon as we arrived in the car park we could see lots of people with cameras and binoculars gathered below the trees on the way towards the main reserve entrance. Grabbing our cameras, we quickly joined them and were soon snapping away at a group of five beautiful waxwings which seemed totally unconcerned by the presence of lots of people excitedly clicking camera shutters just a few feet away from them. What a brilliant start to the day’s birding! 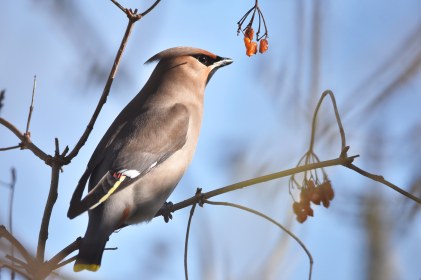 A beautiful Waxwing in the afternoon sunshine

On entering the reserve proper, we made our way first of all to the Bird Garden. There were lots of birds here today, including Collared Doves, Stock Doves, Woodpigeons, Magpies, Long Tailed Tits, Great and Blue Tits, Chaffinches and a pair of Mallards(!). There was no sign, whilst we were present today, of the regularly-visiting Great Spotted Woodpecker. However, we’ve been fortunate in seeing GSWs here on many occasions in the past, so we weren’t too dismayed.

Moving on to the Tree Sparrow Farm we found that the predominant species here today, as is often the case, was the Goldfinch. There were a few other birds around too, of course, including a single Greenfinch and a male Reed Bunting. 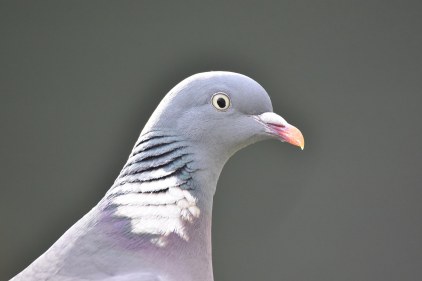 A Long-Tailed Tit in the Bird Garden

A Dunnock outside the Family Hide

Our final stop today was at the Family Hide. It was teeming with Black Headed Gulls in varying stages of moulting back into their titular breeding plumage. Some had completed the moult whilst others hadn’t even started to regain their black head feathers yet. All were very noisy, of course! Other birds of note on show from here today were a rather distant drake Goldeneye which was diving for food, and a single juvenile Common Gull which I initially hoped might be a Ring-Billed Gull, until I discovered that dark rings on the bills of juvenile Common Gulls are em.., well, common!

Outside the hide a beautiful (and very confiding) Dunnock was perched on one of the bushes singing its heart out. Helen and I both have a real soft spot for the Dunnock, and so we were very pleased to be able to take some good close-up shots of this little beauty.

As we made our way back towards the Visitors Centre, we spent a few more minutes in the Bird Garden hide taking shots of Long-Tailed Tits feeding on a coconut-half which had been strung-up alongside the feeders. A rather bossy Blue Tit sent the LTTs packing on at least two occasions so that it could take a turn at the coconut. I had rather thought that Blue Tits were much too small to ‘bully’ any other birds, but you live and learn!

It’s birding at Titchwell Marsh in Norfolk for Helen and me on Friday and Saturday. I hope to goodness the weather is as good as it was in the Dearne Valley today. Fingers crossed!