I visited Old Moor today for the first time in over a month. Apart from taking photos of any birds around the reserve I wanted to see all the alterations which have been undertaken recently.

It was quite a sunny afternoon, and being half-term, Old Moor was rather busy with lots of excited kids around the reserve.

I decided to go straight up Green Lane first. An obliging Jack Snipe has been wowing the crowds from the Family Hide over the last few days and I hoped to be in with a chance of seeing it too. Alas, there was no sign of it as far as I could see. I did see a Kingfisher whizz past though, on its way to some other location.

A Cormorant dries its wings near the Family Hide

I next went all the way up to Wath Ings Hide at the end of the lane. Last week some major alterations were undertaken here to extend the spit of land in front of the hide to completely separate the lake into two distinct areas which can have the water levels controlled independently. It now looks quite different and I look forward to seeing how the changes affect the birds over time.

As far as birds at Wath Ings were concerned, there were hundreds and hundreds of Golden Plovers on the mudflats today, all looking great in the sunshine. A smaller number of Lapwings were intermingled with the Plovers and there were a smattering of ‘usual suspect’ ducks around too. At one point a huge number of the Plovers all flew up together, did a lazy circuit around the lake and then settled again, back where they had been before. It’s quite a sight to watch a huge flock of birds all acting as one, and it always provides great photo opportunities.

I next had a look at the recently altered Field Pool East Hide. It has been rotated through 45° or so, and is now much better placed to look out on the resculpted landscape of the mere. It should provide excellent views of waders from now on. From here today I saw a Little Egret fishing in one of the pools and a lone Linnet was foraging on the mud.

From the Wader Scrape Hide there were huge numbers of water fowl showing well in the Autumn sunshine. Wigeon, Mallard, Little Grebe and Gadwall were all dabbling near the margins of the lake, and a large group of Cormorant had taken up residence in their usual location on what I refer to as ‘Cormorant Island’. Quite a bit of resculpting work has been undertaken on the islands to the right of the hide here too. Once again it will be interesting to see how that changes the dynamics of the location as far as the birds are concerned.

Part of a huge flock of Golden Plover at Wath Ings 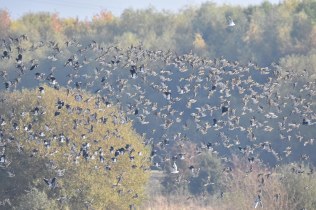 The Goldies (with a few Lapwing) take flight

I had a brief stop in Field Pool West Hide on my way back down Green Lane, but all was fairly quiet here today. There were no signs of any Kingfishers where I’ve previously had great sightings. A group of four Canada Geese were patrolling the water and a few assorted ducks were roosting heads-down along the far-bank margins.

By this time it was getting a bit gloomy so I decided against visiting the Bittern and Reedbed Hides for today. A brief look in at the Bird Garden told me that bird numbers there are beginning to grow again as Autumn takes hold. The hide will soon once again be thronged with birders hoping to see Siskins, Redpolls, Great Spotted Woodpeckers, Willow Tits and Bramblings, all of which are regular over-Winter visitors to the bird feeders set up here.

I made a mental note to also start checking the Tree Sparrow Farm area again on my subsequent trips to Old Moor. Redwings and Fieldfares will soon be around there again, I hope, and I’ll never forget my fantastic Waxwing sighting from here last year.

A good few changes at Old Moor then; it’s a very well managed and maintained reserve which goes from strength to strength. I’m so glad to have it as my local RSPB reserve.