Today was my 80th visit to Old Moor.

It was a warm and sunny Sunday afternoon. The reserve was quite busy and there were several families with eager children trying their hand at pond-dipping as I walked along Green Lane in the direction of Wath Ings. Last time I was here Lapwing numbers were beginning to climb and I saw only a single, solitary Golden Plover amongst them.

From the Recent Sightings blog on the Old Moor website I knew the wader numbers on Wath Ings had begun to grow substantially, and I knew there was always the chance of seeing something a bit special hidden in amongst the large numbers that built-up on the mudflats at Wath Ings at this time of year.

On arrival at Wath Ings Hide I knew immediately that I had a challenge on my hands; there were literally hundreds and hundreds of birds standing on the mud. As expected, they were mostly Lapwings, but there were at least 60-70 Golden Plovers intermingled amongst them. As I studied the mixed flock closely I could also identify a few Dunlin, a couple of Ruff, a Redshank and a Greenshank. A Pied Wagtail was on the mud just in front of the hide, and the ubiquitous and ever-present Starlings, Coots and Moorhens were also there enjoying the September sunshine. Quite a good selection of birds then. 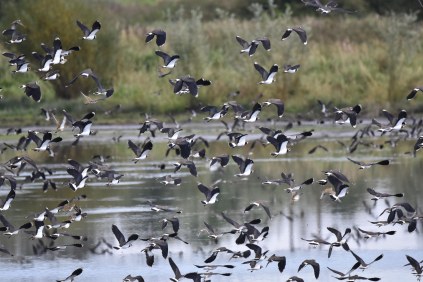 Spot the Golden Plovers – I think there are eight – also one Dunlin and a couple of Starlings!

Part of the mixed Wader flock on Wath Ings

Part of the mixed Wader flock on Wath Ings

As I studied the huge flock of birds, along with about a dozen or so other birders present in the hide, all at once the entire collection of birds leapt into the air and wheeled-about overhead for a minute or so before landing once more on the mud. I’ve seen these large flocks of mixed birds do this a good many times before; it’s quite spectacular to watch them as they wheel about in synchronicity, catching the light on their wings as they fly in tight turns. Identifying the birds on the photographs later-on allows you to see the clear differences between the species. On the ground Lapwings and Golden Plover look to be similar in size, but in the air the Lapwing’s wing-span is much greater than that of the GP, for instance.

After half an hour or so in Wath Ings I walked down to the Wader Scrape to see what was going on there – not much as it happens! There were about a dozen Little Egrets on the water along with a collection of assorted ducks and geese, but nothing very exciting. I did, however spot a quite distant Wigeon – the first I’ve seen in quite a while. Their numbers will soon dramtaically increase again now though, as Autumn sets in with a vengeance!

It was a similar story in the Field Pool West Hide – quiet, with only a few distant Greylag Geese and one or two ducks. I gave it a little while because I’ve previously had spectacular Kingfisher sightings here. One day last year, about four of us keen photographers, had a great time photographing a Kingfisher repeatedly hovering above the water here and then plunginging beneath the surface as it hunted its fishy-prey. No sign today though, alas.

My last call of the day was to the Bittern Hide where I had great success with a Kingfisher on my last visit to Old Moor. Clearly, that was what all the birders gathered in the hide today were hoping for too. I sat there just over an hour waiting for the tell-tale sign of flashing blue signifying the arrival of the bird we all wanted to see. Eventually, a Kingfisher did come, but it didn’t perch anywhere nearly as close as it had done last week. I managed one or two images – enough to identify it as a male bird, and possibly the very same one I had photographed last week. It was still a pleasure to see a Kingfisher again – even at a distance.

A Cormorant fying near the Bittern Hide

The only other incident of note whilst I was sitting in the Bittern Hide was a Heron struggling to swallow a huge perch it had caught. The fish must have weighed at least a pound – a substantial meal for a Heron. About a minute after having successfully swallowed its fish, the greedy bird gobbled down a frog as well!

On the way back towards the Visitor Centre and car park, I managed to capture a rather nice image of a female Common Darter Dragonfly. There are loads of dragonflies around at the moment, but it suddenly occurred to me that I can’t remember having seen a single Damselfly this Summer. Strange!!

Thanks Old Moor. What will my 81st visit there bring I wonder?