On Thursday of last week Helen and I travelled up to Northumberland for a long weekend. We love visiting the Farne Islands on the boat trips and walking along the beaches photographing the castles. I normally blog on the day of a birding trip, but we packed so much into our weekend that it has taken me two days to sufficiently recover and sort out my photos ready to update the blog. Increasing decrepitude is a terrible thing!

We couldn’t leave Sheffield much before about half past two in the afternoon to drive the 180 miles or so to Seahouses and yet we had very much hoped to be able to join the 2-3 hour Serenity Sunset Cruise around the Farne Islands. (We had done this once before and it was fantastic). We hadn’t booked tickets in advance because we weren’t sure if we would get up there in time for the 7pm sailing, and the weather was pretty poor in any case, with lots of rain about.

The traffic was fairly light on the way North, and by the time we reached the Tyne Tunnel area we were feeling increasingly hopeful of at least arriving in time for the cruise. As we entered the tunnel the sky was still a bit grim and drizzly. But on emerging from the other end of the tunnel a couple of minutes later, however, the sun had miraculously appeared in the sky, as if by magic, and the whole evening was transformed!

By the time we were about ten minutes away from Seahouses we felt quite confident as there were still about twenty-five minutes to go before the boat was due to leave the harbour; it would be close, but we could make it. That’s when we got stuck on the B-road we were travelling on by a flock of about two hundred sheep! I was sure we’d had it by then, but we did manage to get away after a few more agonising minutes during which the car was being continually buffeted by large woolly sheep as they slowly passed us and ambled up the road, stopping to forage the hedgerows as they went! Grrr!

We made it onto the boat with about two minutes to spare! And what was really brilliant about it from our point of view was that, since the weather had only very recently improved, hardly any other people were on the boat with us. Last time it had been a bit crowded and it wasn’t always easy to take the photographs we wanted due to the sheer numbers of other keen photographers on board with us. This time we had no such worries and the weather had turned glorious – how lucky was that! 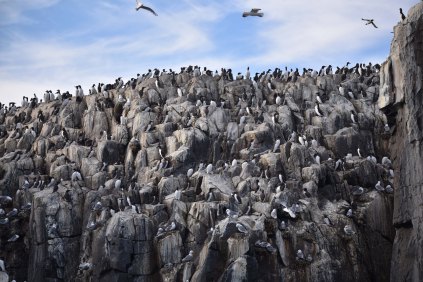 Tens of thousands of seabirds nest on the Farnes each year.

A ‘bridled’ Guillemot shows off its snazzy new swimming goggles!

Over the next couple of hours we were thrilled to be so close to the many tens of thousands of seabirds which visit the Farne Islands every Summer to breed – near the famous Pinnacles at Staple Island we were literally within touching distance of the birds! 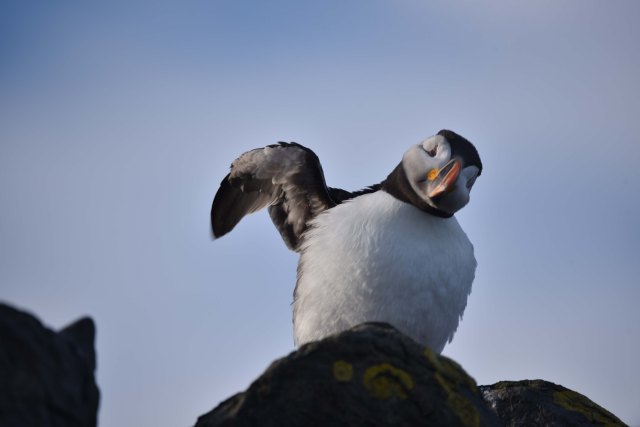 This Puffin very kindly gave us directions back to Seahouses harbour!

By far the most abundant species which breeds on the Farnes is the Guillemot, but there are also huge numbers of Puffin (37,000 pairs), Shag, Razorbill, Kittiwake, Arctic Tern and Sandwich Tern. We also saw a good few Gannets flying overhead, presumably on their way back towards the Bass Rock further up the coast in Scotland. There were also lots of female Eider Ducks present with their young staying close by their sides in the choppy sea, and terns diving to catch fish just by the boat. Numerous Puffins, Razorbills and Guillemots darted overhead, returning to their young with mouthfulls of juicy sand-eels.

Turnstones near the lighthouse

Part of the tour around the Islands takes visitors past Longstone Lighthouse, made famous by the daring rescue carried out by Grace Darling and her father William, (the then lighthouse-keeper at Longstone), in 1838 of a number of survivors from the wrecked steamship Forfarshire which ran aground in the Farnes after one of its boilers exploded in atrocious weather. The lighthouse still operates to this day (powered by solar power nowadays), but is no longer manned. As we sailed past the island, we were pleasantly surprised to see a flock of Turnstones in full breeding plumage scrambling around the rocks at the foot of the famous building.

As we returned towards Seahouse harbour it had begun to become rather chilly, but the sunset was fabulous and we took several photos of Bamburgh Castle looking very mysterious and romantic in the dying sunlight.

Both Helen and I would do the Farnes Sunset Cruise again in a heartbeat!

Friday & Saturday weren’t about birding – it was castles and beaches (and pubs!). However, during the course of the two days we did spot a number of birds, naturally, including some Stonechats at Howick and Sandwich Terns fishing in the sea near Bamburgh Castle.

A Sandwich Tern scours the surface of the sea for sand eels.

We were to be leaving for home again today, and we hadn’t as yet set foot on any of the Farne Islands so far this trip. We have previously been on Inner Farne a good few times and Staple Island once before. These are the only two Farne Islands which the public are allowed to land on. All of the islands (28 in total depending on the tides) are closely controlled by the National Trust whose wardens decide when it is safe for the public to land.

Inner Farne is the most popular and most visited island by far, with wooden walkways to allow the public to safely walk around the island. Staple Island is very different – it is more for serious bird-photographers and ornithologists. There are no walkways on Staple – just bare rock – but visitors have much more freedom to roam and can get really close to the birds – Puffins in particular. As a bird photographer, Staple Island is simply more exciting than Inner Farne, being wilder and less controlled.

One problem with Staple Island visits though, is that landing is much trickier there due to regular sea swells by the landing jetty. It’s often not possible for the boats to safely land visitors there and so its always a bit of a gamble booking for Staple Island.

Helen and I were willing to gamble on Staple Island being accessible today though, as the sea was quite calm. It was rather dull and overcast as we arrived at the harbour, however, and very unlike the beautiful evening we’d enjoyed on Thursday.

We bought our boat tickets, paid the National Trust’s landing fees and made our way to the end of the pier to board ‘Glad Tidings’ – our vessel for the 2-3 hour cruise. No sooner had we set-off when the heavens opened and it rained torrentially. It was quite miserable on the open deck (there being no cover whatsoever for passengers on this boat) and we were soon as wet as could be! There was no way we could get our cameras out in the downpour, and visibility was pretty poor anyway.

We did much of the same guided-tour today as we had on Thursday evening in the glorious sunshine. Today everyone on the boat was hunkered-down against the weather; no-one was taking any photos at all in the pouring rain. Most people weren’t even able to see past gaping anorak hoods or umbrellas!

Eventually, and as we closed-in on Staple Island, the rain began to abate and we could finally begin to watch the birds. We docked at Staple Island with no trouble at all and everyone on the boat began to stand-up in preparation for climbing onto the island. Helen and I were certainly becoming excited, wet bottoms notwithstanding!

That was when the National Trust warden delivered the bombshell – the rain had been so severe and the rocks had become so slippery that they wouldn’t allow us to land! Apparently, another visitor in recent days had slipped and seriously injured themselves on a similarly wet day, and the NT wardens weren’t taking any chances. What a blow!

Things were actually made slightly worse by the fact that a previous boatload of visitors, who had reached Staple Island before the downpour, had been allowed to land and they were now shephered onto our boat for the trip back to Seahouses – a double whammy! 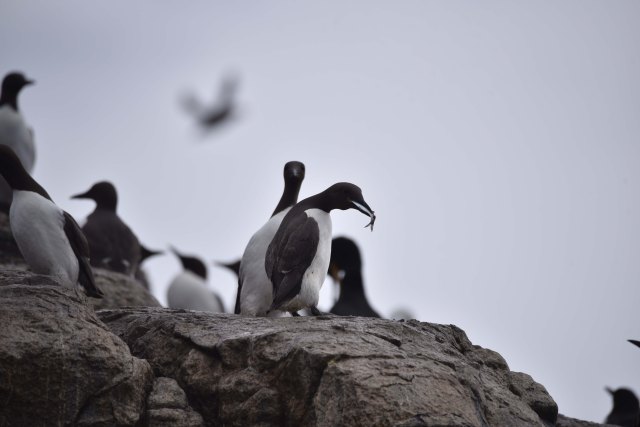 A Guillemot with lunch!

All Helen and I could do was snap a few quick shots of the seabirds on the rocks by the jetty before we chugged off back to Seahouses. As we passed Inner Farne the sun was shining beautifully. If only we had elected to go there again instead today! Grrr! 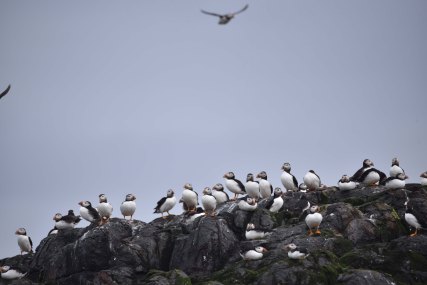 Part of the seabird city on Staple Island

A huge disappointment for us then – better luck next time, we hope!