Another day, another new bird…this time a beautiful Lesser Whitethroat.

I went to a brand new location today – Gibraltar Point NNR near Skegness in Lincolnshire.

It was a bright day when I arrived at the reserve. A light breeze was blowing in off the Wash, but it wasn’t strong enough to cause any concern. I had wanted to visit Gibraltar Point for some time, and with several sightings of no-less than a rare Caspian Tern on Tennyson’s Sands in recent days, I decided today was the day I would try my luck there.

I parked at the Beach Car Park which is a little bit along the road from the brand new Visitor’s Centre and main car-parking area. The new centre was built to replace an old one that had been destroyed in bad weather a couple of years back. Although I decided not to go inside it today, I could see from a distance that it looked a fabulous building, and definitely somewhere to visit on a future occasion.

I visited each of the hides which overlook Tennyson’s Sands, and although I didn’t see terns of any kind, let alone a Caspian one, there were quite a number of other birds around. A good many avocets were sifting their way through the mud in the shallows, whilst a few others sat tightly on nests, a large group of Canada Geese were having a snooze on one of the islands, and various other birds including Shelduck, Reed Warbler and Little Egret kept me occupied as they zoomed back and forth around the lagoon in front of me. 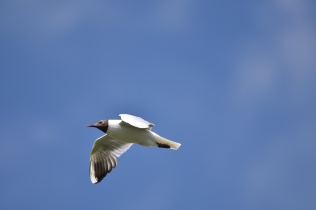 Next I visited the Mere and Fenland Lagoon hides. A solitary, distant Redshank and a roosting Little Egret were all I could see on Fenland Lagoon, unfortunately, but I could see great potential there for passage waders come the Autumn, given its proximity to the Wash.

As I continued walking along the path towards the sand-dunes, I could hear a great assortment of small warbler-type birds, but as usual they were proving nigh-on impossible to spot.

I walked all the way down to the shoreline and stayed there a while to enjoy views of the ‘swarm’ of offshore wind-turbines that have been installed on the Wash.

On my way back along the path I had great views of a Cormorant that was flying back and forth overhead, but undoubtedly my best shot of the day was the one, single frame I was able to capture of a cracking Lesser Whitethroat before it disappeared back into the safety of the impenetrable undergrowth as quickly as it had appeared! If I’d blinked I would have missed it altogether! I was particularly pleased to see the bird as I didn’t already have an image of a Lesser Whitethroat.

So, I was lucky enough to get a new bird today – just not the one I had set-out hoping to see. Birding is never predictable, but then no-one in their right mind would want it to be!