Another beautiful Spring day saw me visiting Frampton Marsh once more. I chose to come here today because the weather forecast for the Boston area was very favourable (if a bit breezy), but also because of the recent sightings which had been recorded at Frampton.

Only yesterday a Wryneck was seen along the sea-wall path which separates the reserve-proper from the salt-marshes leading out to The Wash. Other ‘good’ birds recorded on the reserve yesterday included Wood Sandpiper, Little Stint and Garganey. Well, I’ve never seen a Wryneck or a Wood Sandpiper so the prospect of possibly getting one or both of those was a powerful motivator!

I began by parking down at the old car park near the sea-wall. The path between here and the sea-wall itself has water on each side. I’ve seen some really exciting birds down here before such as one occasion last Summer when Helen and I saw a full breeding-plumage Spotted Redshank just a few feet away from us.

Well, today was every bit as exciting: within two minutes of leaving the car I was photographing Dunlin, Ringed Plover and a Little Stint – all showing beautifully with the sun shining on them to display their plumage to great effect. The Dunlin, in particular, looked fabulous in its full Summer garb.

After this great start I decided to walk along the sea-wall to the lone bush where the Wryneck had been spotted yesterday; sadly there was no sign of it today though!

After walking along the sea-wall a bit further, I came to what I refer to as the ‘Wheatear Rock’. (It probably shouldn’t be too hard to work out which bird I’ve previously spotted perched on top of that!). I could see that there was some kind of Pipit or possibly a Skylark on the rock today, and I quickly fired-off three frames before the bird vanished as quickly as it had appeared.

A Pipit, but which variety??

It was only when I got home later in the day and looked at the images on my big computer screen that I began to realise that I had a bit of a puzzle on my hands. Using my trusty RSPB book, I soon discounted the Skylark as a possibility, but the pipit variety that it most-closely resembled was the Tree Pipit, due to the minimal markings on its belly. I was very wary about that identification though, as the Frampton area isn’t a particular hotspot for Tree Pipits, and neither is a salt-marsh habitat! (There’s a major clue in the bird’s name!). The only other reasonable option is that it is a juvenile Meadow Pipit which hasn’t got fully developed markings on its flanks as yet. This is a much more likely explanation and serves to highlight just how tricky bird identification can be. 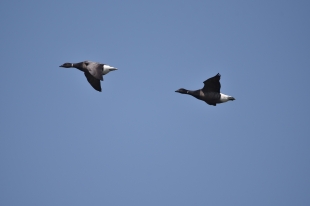 After returning to the car, I re-parked in the proper car park by the Visitors’ Centre so that I could take a walk along ‘Warbler Way’. I’d not been along this path before, but quickly realised how appropriate the name was; there were loads of small birds twittering about me along the path! That said, it’s very hard to spot them now though due to the density of the vegetation by this point in Spring. I did manage to capture a Sedge Warbler with a big insect in its mouth in one tree, however, and a fine Linnet in another. This is a great path and I’ll certainly come along here again.

At one or two points, where there are breaks in the trees, I could look out onto large marshy areas. I stood quite near a couple of fellow-birders who were watching a pair of Wood Sandpipers through their spotting scopes. However, it was a narrow gap in the trees and I couldn’t see them from where I was, alas. Not to worry, there’s always next time isn’t there?