Today was Day 1 of a five-day Birding ‘Adventure’ for Helen and me. We are going to be visiting some of our favourite Norfolk nature reserves, but today we visited Rutland Water on the way before heading for our hotel near King’s Lynn.

It was bright and sunny when we arrived, if a little breezy. We wanted to see the Ospreys on Manton Bay so we headed up to Lagoon 4 and settled ourselves in Dunlin Hide.

The first sighting we had was of a pair of Great Crested Grebes which were carrying out their distinctive courtship display, rearing up in the water whilst facing each other complete with mouthfulls of weed. This was the first time Helen and I had witnessed the full courtship display and it was great to watch. 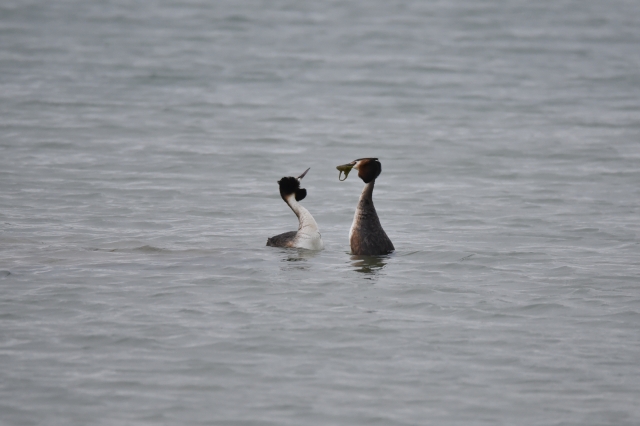 A few minutes later an Osprey appeared and began fishing over the lagoon. We were excited to have another opportunity to photograph a specimen of this very special bird. Twice, whilst we were watching, the Osprey dived into the water, but neither time was it able to catch a fish. Mind you, the poor thing was being continually harried by groups of  either lapwings or gulls, which must have been distracting to say the least!

Following our stay in Dunlin Hide, we next visited Shoveler Hide and the other hides on Lagoon 3 where we saw a few Common Terns, a Long Tailed Tit and a Wren, amongst other birds.

Unfortunately, by this time the weather had broken down; it was now raining and had become quite cold so we didn’t stay long before returning to the Visitor Centre for a much needed hot chocolate.

As we sat in the Visitor Centre we began to make a list of the birds we had seen. 38 species, on what turned out to be quite a nasty day, was good going!